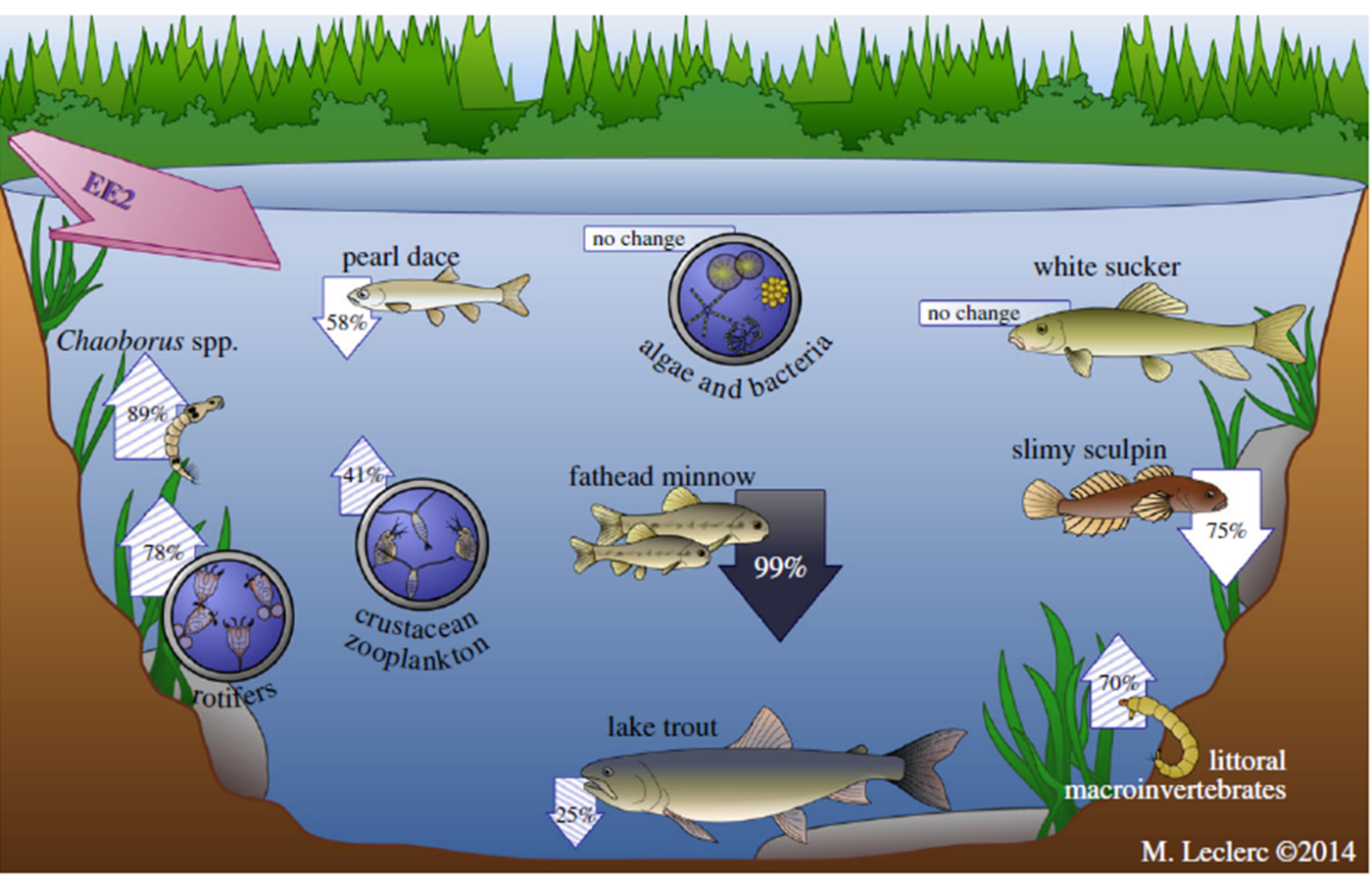 Canada has 58 freshwater lakes that can be used for research. Researchers have used these lakes to understand the impacts of mercury on fish, prove that phosphates (found in fertilizers and detergents) cause excessive algal growth, and produce vital evidence on the effects of acid rain1-3. Researchers at the experimental lakes can do some of the most realistic experiments in the world, far removed from ‘typical’ laboratory experiments, which are done on a much smaller and simpler scale.

In one study from 2014, Karen Kidd (McMaster University: http://www.karenkiddlab.com/) and colleagues investigated how adding synthetic estrogen to one of these lakes impacts aquatic organisms. Estrogen is a female hormone, but it is also found in smaller quantities in males. It is naturally produced in many organisms and can also be synthesized. The researchers studied synthetic estrogen because it is used in birth control pills and significant amounts of it can be excreted by humans4. The excreted estrogen makes its way into sewage and wastewater, which are subsequently released into water bodies. Aquatic organisms can thus be directly exposed to estrogens.

The authors treated one of Canada’s experimental lakes, called Lake 260 (see Figure 1), with estrogen for three years. Researchers added estrogen to the lake’s surface waters during the summer months, when the lake was not frozen (see Figure 2). They maintained an estrogen concentration in the lake that was relevant to real lakes impacted by wastewater.

Researchers monitored the type, size, and total number of aquatic organisms while they added estrogen to the lake. They also collected data in the lake for two years before adding estrogen and two years after, as well as from other lakes nearby that were not treated with estrogen. This was done to see if organisms exposed to estrogen differed in any way from non-exposed organisms.

The authors found that the makeup and number of bacteria, phytoplankton, and zooplankton were not affected by estrogen, but estrogen increased the number of rotifers, glassworm, and insects, while decreasing the population of most fish. What does this mean?

Small fish like fathead minnow, pearl dace, and sculpin were directly affected by estrogen. It disrupted the development of their sexual organs leading to failure in breeding. This caused their populations to crash. Since these fish feed on rotifers, glassworm, and insects, the population of these organisms went up as the fish population declined. Bigger fish like lake trout which rely on these small fish for food consequently suffered, so their numbers went down too (Figure 4).

The scale of this study was very impressive, as the authors were able to use a whole lake and the effects of estrogen was examined on many different species for seven years (before, during, and after estrogen treatment).

However, there were a few shortcomings. Only one lake was treated with estrogen, and the study was not duplicated. And while results from the treated lake were compared to six untreated lakes, different species were collected from different untreated lakes (for example, glassworm and insects were sampled from different lakes). Besides not all species were examined every year (for example, insects were sampled for only four years). Also, it’s much more difficult to control the concentration of a chemical when studying a real lake. While the average concentration of estrogen in the treated lake remained relatively constant for the three treatment years, some parts of the lake had twice as much estrogen as the other parts. It is therefore possible for some aquatic organisms to have received less estrogen.

Despite this the study, like some of the other famous studies conducted on Canada’s experimental lakes, gave clear results. It conclusively proved that exposure to estrogen at concentrations that can be found in the environment can affect aquatic organisms. It showed that estrogen effects can be observed in the real world and that aquatic organisms can be directly or indirectly harmed by it, through breeding failures or loss of food source. It also demonstrated that the estrogen we release into water bodies can alter the makeup of aquatic life.